STEVE INSKEEP, HOST: Within a few months, Haiti endured a presidential assassination, an earthquake, a crumbling economy and the spread of street gangs.

SCOTT DETROW, HOST: Authorities suspect one of those gangs in a mass kidnapping.

Someone abducted 17 people. Sixteen are U.S. citizens; one is Canadian.

And all are part of the U.S.-based missionary group.

The group includes children, and one of the children is 2 years old. 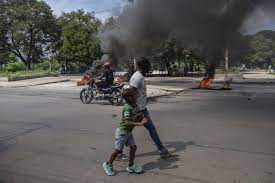 INSKEEP: What is this missionary group, and what were the members doing in Haiti?

CHARLES: Well, it's the Christian Aid Ministry. And the members, they're part of the Mennonite community.

And these individuals actually belong in Haiti.

They provide assistance, education, other kinds of services.

There are a number of missionary groups that are there and that do assist the Haitian population.

INSKEEP: And as best you can determine, what were they doing when they were captured? And how were they captured?

CHARLES: They had been visiting an orphanage, and they were on their way back.

And they were traveling in a van, as we understand, and this is when they were captured by this gang.

This gang is known to attack vehicles and to basically kidnap the entire vehicle, whether it's a bus, it's a car or it's a van.

INSKEEP: Now, do I understand this correctly?

That's the highway in question here?

CHARLES: It's actually a road. It's a national road.

But, yes, it connects Haiti to the Dominican Republic, so it's very well-traveled.

And this has become an issue in recent years, not just, you know, in the last several days.

INSKEEP: And is it clear what it is the kidnappers want?

CHARLES: Well, usually when these situations happen, you will eventually hear from the kidnappers - well, not us, but, you know, the individuals or their family members where there's a request for a ransom.

We do not yet have any information as to whether one has been issued and, if so, how much.

These are usually large amounts. And the individuals or their family members or, in this case, the organization will have to negotiate.

Contrary to what a lot of Americans believe, the FBI doesn't go in and just release you.

They will assist you with negotiating the ransom release.

INSKEEP: Well, that raises the next question.

We're told the United States has become involved in the investigation here. What is the U.S. doing?

CHARLES: Yes, because these are American citizens.

Ironically enough, yesterday, the Haitian National Police had no confirmation whatsoever of this kidnapping while, you know, there were all of these reports, you know, and we had confirmations from others.

But because we're talking about Americans, they would contact the embassy, which would then alert the FBI.

And so they - their job now is to get in touch with either family members and help.

INSKEEP: We are hearing about this because there are U.S. citizens involved, because it is a U.S.-based missionary group.

But I'd like to ask more broadly about the law-and-order situation in Haiti, which may pass by without our notice or without as much notice.

How secure, how safe are Haitians feeling these days?

CHARLES: Haitians are not feeling safe these days.

I have to tell you, between July and September, the number of kidnappings in Haiti has increased by 300%, according to a local human rights organization.

There are kidnappings that happened that we don't know about because people do not go to the police.