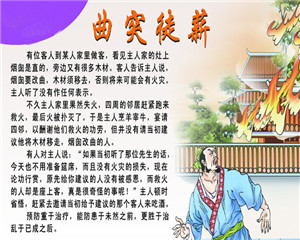 Who Deserved the Place of Honour?

A man passing a friend's house noticed that the kitchen chimney was straight, and a pile of fuel was stacked beside the stove.

"You had better build another chimney with a bend in it," he advised the householder. "and move that fuel away, otherwise it may catch fire."

But the master of the house ignored his advice.

Later the house did catch fire; but luckily the neighbours came and helped to put it out. Then that family killed an ox and prepared wine to express their thanks to the neighbours. Those who had received burns were seated in the places of honour, and the rest according to their merit; but no mention was made of the man who had advised them to build a new chimney.

"If you had taken that man's advice," someone said to the master of the house, "you could have saved the expense of the ox and wine, and avoided a fire. Now you are entertaining your friends to thank them for what they did. But is it right to ignore the man who advised you to rebuild the chimney and move the firewood, while you treat those who received burns as guests of honour?"

Then the master of the house realize his mistake, and invited the man who had given him good advice.